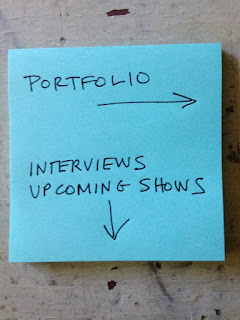 As Barry Whistler Gallery is working on their new website, historical images such as installation photos of my previous shows since 1994 have been taken down. 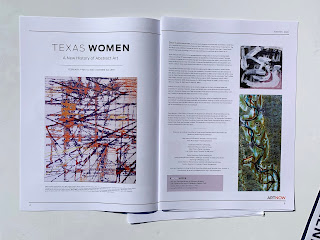 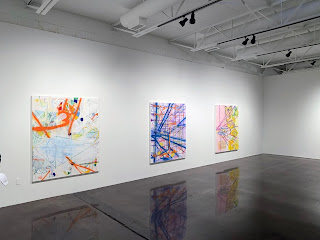 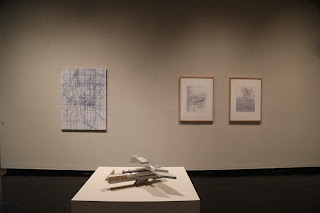 Curated by Elizabeth Mead, Professor, College of William and Mary

Lyndsay Knecht/LK: First, speaking to the source parts you mentioned. To be sure, re: material: you photographed your monotypes and then manipulated the digital image, for this work?

Lorraine Tady/LT: Yes, BUT it’s not that simple. The “monotypes” are multiple plate drypoint monotypes, so 4-5 copper plates (“image parts”) usually are combined/layered to make the final image. While those images (parts and combined parts) are photographed and brought into the computer, the various arrays of layering those parts/images continues---the layering I did on the press continues in different ways as layering in the computer (i.e. various new images made with various parts).

Furthermore, an important note is that I print out the images from the computer, alter them by hand, re-scan, then bring them back into the computer. This is a process. My resulting images share a type of genetic heredity, where some parts/or traits show up now and again as markers [i.e. as landmarks in wayfinding or as how vocabulary words re-assemble to tell different stories.]

For this piece (at Site 131) I like to remind people of the material I work with—my work has never been too shiny or slick and often has a rough edge somewhere. By having this image somewhat crooked and pixelated ala “bad printing,” I'm reminding people that this ultimately is a digital manipulation and a photo image (and the original source parts are my very tactile drypoint monotypes.) I take advantage of some of these “mistakes” that appear in my process and intentionally take some out and leave some in.

LK: Were you looking a map when you produced this piece? If so, what kind of map was it?

LT: If you understand my process, those “parts” can consist of both appropriated images and unique images. Specific appropriated images have and will appear in my work. For example, a large drawing in my “Sparklines” solo exhibit last year at Barry Whistler Gallery contained a floor plan of the Dallas Contemporary; in another, a sign marking a hiking trail in Iceland.

In this piece, however, a map I recognized “appeared” in the resultant work through the process. It was the Bakerloo and Piccadilly Circus intersection of the London Tube map. So, no I was not "looking” specifically at a map when I produced this particular piece, or using a map to create this piece, but I do look at maps and graphs and they are part of my visualization and sometimes I appropriate them. “Sparklines” borrowed its title from a word coined by Edward Tufte, a key figure in the field of data visualization. Sparklines are lines that carry data.

LK: I've been asking each artist what painting as a gestural discipline means to them, and how that philosophy might manifest in the work they contributed to the show. What are you saying about/to/with painting, with this work, whether in the production of it or in the choosing of it to submit for consideration?

LT: For me, “painting" has always been about process and this wrestle between painting and drawing (and sculpture/building); and my process has a sort of printmaker’s approach (variation, reusing images, alterations) and it involves a slow building of the image. [My sculptures were “drawings” in space to figure out my paintings. My drypoints slow a line down through the friction of marking copper.] For me re-accessing my images in various ways throughout my career concerned my interest in image structure. The mechanical or digital in painting is yet another tool for me to use in my investigative process.

I submitted this work to the curators because my art process has utilized the mechanical or digital tool starting back in grad school in 1991 (where I used the xerox machine to alter and create new images from hand-made images), and of course the camera. While I had been using PS to make images in the early 00’s—as an additional tool to “see”, invent and re-translate my images, then paint them—it was only in the digital/paint paintings and digital prints in “Sparklines” that I found a way to make the images my own (by mediating my images with “printmaking thinking”.) Since then the digital prints and “digital canvas grounds” which I had previously painted on (unifying the two surfaces as a collage), made way to images that stand on their own without further paint.


"SPARKLINES: Paintings, Drawings and Prints" 2017 Barry Whistler Gallery, Dallas
see reviews and interviews above at the start of this post 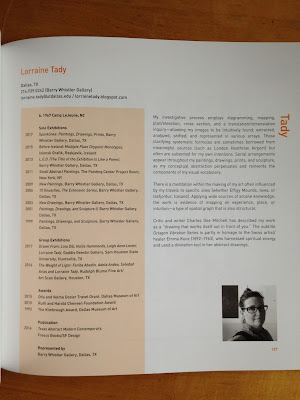 Edward Tufte’s “intense continuous time-series” reduction of data into a strong, specific graphic line (from The Visual Display of Quantitative Information, 1983) was eventually re-named “sparklines” in 2006. Sparklines as my exhibition title is a tag for my own poetic translation of Tufte’s “extreme compaction of process and experience” into a line.

In those 25 years, my work in painting, drawing, printmaking and sculpture has explored a process oriented conceptual abstraction using re-construction or re-assembly of my bank of invented imagery. The Sparklines show includes paintings, drawings and prints from my “Octagon Vibration Series” (OVS) of intuitive architectural spaces, digital explorations and continued arrays of interconnected parts. Some of this OVS work is map-like as an intuitive translation of experience in a place—a type of spatial graph that is also structural. My art has been influenced by excursions to northern New Mexico; Cape Cod, Massachusetts; and Paris, France. The Dallas Museum of Art “Dozier Travel Award” enabled me to go to the Westfjords and the Reykjavik area in Iceland in 2015.

The translation and re-translation of the components of my visual vocabulary employs a process of investigative diagramming and orthogonal projections using plan, elevation, cross-section and extrusion. This process allows my images to be intuitively found, extracted, analyzed, shifted and represented in various arrays. These systematic formulas are sometimes borrowed from meaningful sources (i.e. a London Heathrow Airport terminal plan in the drawings “Octagon Vibration Series/Heathrow 1-4,” 2017; or the Dallas Contemporary floor plan in the drawing “Octagon Vibration Series, Escape Hatch/Observant,” 2017.) However, as exemplified in “Heathrow 1,” they are often subverted for my own intentions.
Serial arrangements exist throughout my paintings, drawings, prints and sculpture as this process perpetuates my conceptual abstraction and reinvents particular aspects of my image bank. My “Octagon Vibration Series” started in 2013 as an inverted continuation of my “L.E.D.” series. The black paintings with bright lines in L.E.D. (The Title of the Exhibition is like a Poem) began with a mental picture of electricity and dark water gleaned from Lautreamont's 1868/69 Les Chants de Maldoror. Further inspiration included seeing a resonant yellow line on the airport tarmac. These thoughts evolved with sonar and radar as homage to leading, finding and the heaviness of a searching act. The subtitle “Octagon Vibration Series” (or OVS) is partially in recognition of the Swiss artist/healer Emma Kunz (1892-1963) who harnessed spiritual energy and used a divination tool in her abstract drawings to find beneficial results for her patients.

For the new work in Sparklines I applied direct drawing on large paper, but also rebuilt and mixed parts of my OVS multiple plate drypoint prints using digital programs and creating works such as the print “Untitled 1-R,” 2017, pigmented print on paper from digital OVS, 22x18 inches. Since technology (the photograph, Xerox machine or new digital programs) has always been a tool for artists of my generation, I was curious now to employ digital printing to canvas as part of my painting process. Enlarging select new digital images and printing them at 40% would allow me to work on top of the printed ground and continue the making of my overall image. The painting “Octagon Vibration Series/Radial Velocity,” 2017, acrylic and solvent based ink on canvas (printed canvas from digitally altered OVS print), 48x36 inches, is an example.

A timeline of sorts marking my process for Sparklines begins with the OVS series in 2013. Then, multiple plate drypoint prints anticipating a trip to Iceland. Next, actually traveling to Iceland with my 2015 Dallas Museum of Art travel award. This resulted in more OVS works specifically influenced by places in Iceland [i.e. the drawings exhibited in the group show Tangled up in Blue such as “Octagon Vibration Series, Isafjordur (Westfjords, Iceland).”] As explained earlier, the studio work then became an investigation into ways to use some of my favorite Iceland multiple plate drypoint monotypes as a source for new large drawings, paintings and digital prints.

Some resultant works and their relationships are the print “OVS#27” for the drawing “OVS/Escape Hatch/Between” and the print “OVS#22” digitally mashed up in the earlier mentioned print “Untitled 1-R.” “Untitled 1-R” was then used as a ground in the aforementioned painting “Octagon Vibration Series/Radial Velocity,” (as well as in the painting “Octagon Vibration Series/Red Shift Frequency Fold,” 2017, acrylic and solvent based ink on canvas using altered OVS digital print, 72x60 inches.) Of note, developing an image through process and layering is also imbedded in the OVS multiple plate drypoint monotype source works. They are made from my collection of 50 plus copper plates that are interchanged in the printing process to develop variations in the final image. One might recognize and locate part components of my visual image bank while viewing my work, finding in the process what is akin to landmarks in my work’s terrain.

As with Kunz and the artist Agnes Martin (Canadian 1912-2004), there is a meditation in the making of my art. Besides a practice based in process, my work is often influenced by my travels to specific sites and experiences. However, these site visits may not show up literally in the image. Drawing on wide sources of arcane knowledge, the work is map-like as an intuitive translation of experience in a place—a type of spatial graph that is also structural. While elements from map making often appear (i.e. wind roses), one point of view gives in to multiple views. The work is painstakingly slow, like balancing needles. One mark, sign or symbol is incrementally built up, connected to and leading to another mark, sign, or symbol. The incremental line building in my work is similar to Joanne Greenbaum’s paintings (American b. 1953). The incremental building through layers is similar to works by Julie Mehretu (Ethiopia b. 1970). Furthermore, my structural mediation of the diagrammatic visual language is more akin to Greenbaum and Mehretu, rather than the precise drawings of Jorinde Voight (German b. 1977) or the cartography of Emma McNally (b.1969 England). It always felt right when critic and writer Charles Dee Mitchell described my work as “a drawing that works itself out in front of you.”
Posted by Lorraine Tady at 9:07 AM 1 comment: 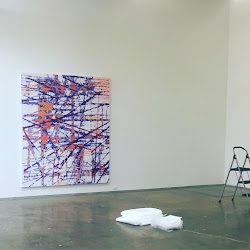